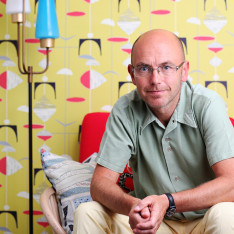 Wayne Hemingway is one of Britain’s most acclaimed designers. With his wife and partner Gerardine, Wayne built Red or Dead into a label that received global acclaim resulting in
winning the prestigious British Fashion Council’s Streetstyle Designer of the Year Award for an unprecedented 3 consecutive years in 1996-1998.

In 1999, having sold Red or Dead in a multi million pound cash sale they set up HemingwayDesign, which specializes in affordable and social design. Their projects include, the award winning Staiths South Bank, for Taylor Wimpey Homes.
HemingwayDesign is now a multi disciplinary design agency led by two generations of the Hemingway family and a wider team of talented designers. It has a core philosophy that design is about improving things that matter in life and this philosophy informs their choice of projects and a tile range for British Ceramic Tiles.

Wayne and the team put on a major new cultural event in August 2010, the award winning Vintage Festival. The follow-up event took place in 2011 at London Southbank Centre as part of the 60th Anniversary of The Festival of Britain and the following year A Vintage Guild Weekend in Preston was the highlight of Guild 2012. The Hemingways also curated the official party for The Queens Diamond Jubilee in Battersea Park (June 2012). 2013 will see the launch of lingerie and furniture ranges as well as the team embarking on heading up the design for the creation of the world’s first amusement park for thrilling historic rides, Dreamland in Margate. Wayne is on the Design Council Trustee Board and the Design Council CABE Committee. He got an MBE in the June 06 Queen’s Birthday List, is a Professor in The Built Environment Department of Northumbria University, a Doctor of Design at Wolverhampton, Lancaster and Stafford and a Fellow of Blackburn College. Wayne is Champion of Creative Lancashire and a member of our board.