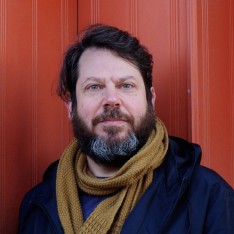 Daniel was a Senior Tutor at the RCA and is now Professor of Design at Kingston, as well as founder/director of Fixperts, From Now On and the Maker Library Network.

He is an internationally recognised curator, strategic consultant and lecturer in the field of contemporary design. His specialist background as an industrial designer puts him in a unique position in the curatorial field, as does his strategic and curatorial practice applied in the context of design education.

Charny curated major shows for the Design Museum and the Victoria and Albert Museum including ‘Power of Making’ one of the most popular exhibitions in the V&A’s history. Involved in strategic consultancy he led on the Content and Interpretation strategy for the Design Museum London contributing to their successful bid for HLF major projects funding in 2012.

Between 2002 and 2010 he was the founding curator of The Aram Gallery where he developed an international programme and established it’s focus on experimental and new design. Charny has been involved in design education for 20 years including between 1998-2012 at the Royal College of Art where he was Senior Tutor on the Design Products Department.

He is highly networked on the international design scene where he is an active keynote speaker, think tank facilitator and juror for design prizes. He is an Honorary Senior Research Fellow at the Victoria and Albert Museum.

More recently Daniel developed the strategic vision for Central Research Laboratory (CRL), a coworking space and accelerator, with prototyping workshops and in-house expertise to meet the needs of ambitious startups and businesses, where he advises the operations team and helps to ensure CRL’s proposition meets the needs of design and maker communities.