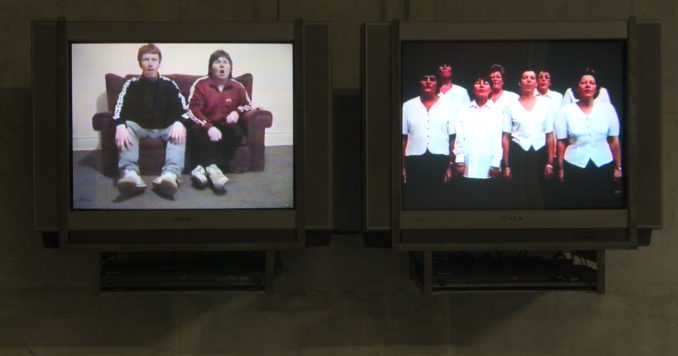 I work like an archaeologist, digging amongst our collective forgotten and discarded memories, our lost words, and undervalued objects, remaking the images we associate with our communities, hoping that something extraordinary will reveal itself and that unexpected connections and collisions will emerge. The work I make
has an aesthetic economy that allows simple formal gestures to communicate complex propositions.

What was your first memory of creativity?

I had a teacher who turned up on stilts, kept snakes in a tank and taught us to see, think and speak about the world around us. Every drawing was a good drawing, snow in the playground became sculpture material, words were as important as images and he taught me to make things out of whatever was to hand. This was Blackburn in the early 80’s, so his approach was unusual, but even more unusual was that he left to teach in Kuwait.

His name is Nigel Hartnup. We stayed in contact and much later I found out that he had assisted Yoko Ono, Claes Oldenburg and Peter Blake at Robert Fraser’s Gallery in the 60s. I have photographs of him building the Sgt Peppers set and have recently been supporting him in writing an account of those times. He is tied to my first memory of creativity in that he gave me the desire, and then the confidence to be an artist.

What was your creative journey to get to where you are?

School in Blackburn led to a foundation at Blackburn College, where I learned to make films, performances and audio works on an exciting and experimental programme in the (then newly-opened) Media Centre. I left Blackburn and studied both a B.A. and M.A. at Chelsea College of Art. The experiences I had there, still inform my ideas about what an art school should be, and how art can be made. I went to art school to learn how to paint and ended up making records, writing for magazines and working in every discipline except painting. Art school teaches you to think and that is the skill that is most valuable.

What impact have big name clients had on your career?

I showed work at Tate while I was still on my degree, and was reviewed in the broadsheets and industry magazines, alongside more established emerging artists. As a consequence, I started exhibiting internationally and immediately established a profile that has sustained me as my practice has developed. I have no doubt that the profile Tate gave me had a huge impact on the opportunities that followed.

How do you establish your own style over a period of time and still stay relevant?

I don’t think we choose what is relevant or what isn’t, and if you worry too much about these things, it gets in the way of the work.

Does your process develop thematically, or is it more distinctive and random?

I always start with research. This may manifest as experiments with materials and processes, or with an idea or concept that becomes a clear proposition for an art work. At some point all of these activities intersect and start to become clear strands of practice. The work I make for The Saatchi Gallery Magazine begins as a commission with parameters that may be the amount of pages available, word count or even available images.

Who has been the biggest influence on your work?

My experiences at Chelsea College of Art in the mid to late Nineties. I left Blackburn and found myself on the Kings Road working with tutors who were famous in their own right. This was during the peak of the YBA period and London felt like the centre of the world. I was making work, exhibiting internationally and having tutorials with Gillian Wearing, Judith Goddard, Kevin Atherton, Georgina Starr and passing Martin Creed and Roger Acklin in the corridors. It was an incredibly exciting time in that I was speaking to the artists whose work I was seeing in the galleries. It had a profound impact on my work in that I left Chelsea with the confidence to collaborate, to work in any discipline I wanted and to aim high in terms of output and profile.

What inspires you or provokes the motivation towards creativity within?

I don’t believe in inspiration, I believe in myself and I believe in collaboration. I don’t sit waiting for something to happen. I make things happen with whatever I’ve got to work with. I find people to realise the work. Making requires bravery. It takes strength, courage and determination to will an idea into life, to push materials and machines to realise the images and voices in your head, to use your hands to transform the ordinary into the extraordinary, to secure the trust of others and ask them to believe in what you can do together. Making means ‘making things happen’. That requires bravery by all involved.

What is it you love most about what you do?

I have the most unexpected and incredible adventures.