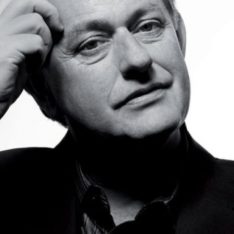 Born in 1956 in Sheffield, UK. After leaving school worked in computers for 3 years, in 1977 formed The Human League. Formed production company/label British Electric Foundation in 1980 and  formed Heaven 17 the same year.

Founded Illustrious Co. Ltd. with Vince Clarke in 2000 to exploit the creative and commercial possibilities of their unique three-dimensional sound technology practice in collaboration with fine artists, the performing arts and corporate clients around the world. He also lectures extensively on music production, technology, and creativity at universities and colleges across the world. He has just been appointed the first ambassador for the international arts organizMemebation In Place Of War, and is a board member and trustee for the charity Street Sports Hope in Sierra Leone. Martyn is proud to be a supporter of artist’s rights, and is also a proud socialist and international activist, helping to fight oppression and injustice worldwide.

Martyn is being interviewed by John Robb for our Conversations in Creativity event taking place on the evening of Thursday 17 May at the Blackburn Cathedral.

Booking is essential, tickets via Eventbrite.