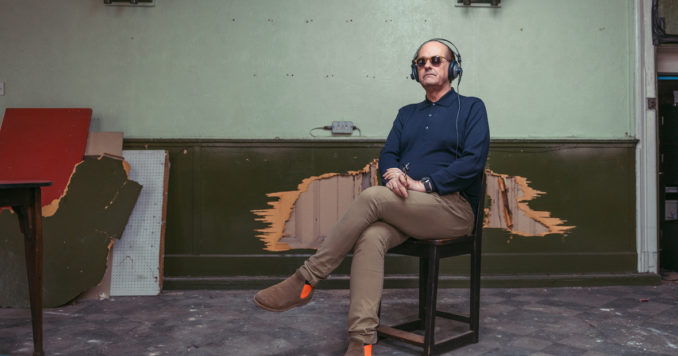 First of all, some context…

The year is 1999 – at this point I’d already spent over 30 years in the music business as an artist with The Human League, Heaven 17 and British Electric Foundation, and as a producer for artists such as Tina Turner and Terence Trent D’Arby, but this party felt like it was about to end. As the new Millennium approached, it was clear that a new creative direction had to be found…

In 2000, Vince Clarke (Erasure) and I were asked to advise on a new project in Sheffield called The National Centre For Popular Music – our brief was to help design a 3D sound auditorium in the extraordinary Branson Coates-built ‘steel drums’ building in the centre of Sheffield. By coincidence, a few months earlier, I’d become very interested in what I, amongst many, regarded to be the future of the music industry – surround sound – and was convinced by a demonstration of the newly equipped 5.1 studios at the Strongroom in Shoreditch.

We were commissioned to create a demonstration piece for the NCFPM in a purpose-built 3D sound auditorium. As we did our research about existing 3D sound processing, it became clear that this was largely a theoretical academic pursuit, and that very little was available to use that could be understood by the layman – what was also obvious to us was the enormous potential for creative uses of a properly designed system, which would enable composers with little specialized knowledge to create astonishing, immersive 3D sound compositions.

So, the timing for creation of something radical and new felt perfect…in collaboration with Paul Gillieron Acoustic Design, we helped to design a piece of software called 3DAudioScape. This has gone through many improvements and variations since then, and has been brought up to date by programmer and Ambisonic expert Dave Hunt – a description of the functionality and a trial version can be found here – . This program has been the workhorse of Illustrious since we formed the company 15 years ago.

Simply put, 3DAudioscape sounds similar to the kind of sound we hear in cinemas (5.1 or 7.1) but with an additional height axis – creating the ultimate in realistic sound (as we all listen to the world in 3D without consciously noticing, 3DAS triggers a deeper sense of sonic realism and therefore emotional engagement). The soundscape is delivered by using full range speakers arranged usually in 2 rings – one high and one low – creating a three dimensional space within which 3DAudioScape is capable of delivering up to 16 soundstreams moving in any direction at 24 frames per second. We use Logic Pro as a compositional front end, which then delivers its outputs to the inputs of 3DAudioscape via a digital matrix (Soundflower or Jack). As part of the configuration of 3DAS, the locations of the speakers used are entered into the program in relation to a nominal ‘centre point’ of the space – this enables 3DAS to create the virtual 3D space within the bounds of which, the different soundstreams can be moved. It’s important to note that the speaker array doesn’t have to be symmetrical – 3DAS can cope with any shape of soundfield. The benefit of this is that, after creating the 3D soundscape in our production studio, we simply have to enter the new speaker co-ordinates from the venue in which this is going to be used – foe example the Royal Albert Hall – and 3DAS simply scales and shapes the soundfield to fit the space. In fact, it is even possible to witness the 3D ‘sound-scene’ from outside the location of the speakers themselves!

For us, the real excitement of using 3D sound is the ability to create emotionally engaging and authentic soundscapes, which can simulate the real three-dimensional sound world we all inhabit. It brings height, depth and breadth to play, which immerse the listener. Also, it is universally understood and connects with all ages, cultures and ethnicities. For the past 15 years, Vince and I have created many soundscapes to enhance architecture, public spaces, and heritage sites and we have created  an extensive network contacts within the arts – we work with poets, writers, musicians, artists, sound historians etc. to create original and dynamic sound installations that function independently or as an accompaniment to other cultural content.

We like to call our area of expertise ‘applied soundscaping’ – we feel this differentiates our approach from the more technically-oriented acoustic design world, and encourages a different view – that content is king, and that this technology is simply the best possible tool for delivering unique sonic experiences for many applications.

I would argue that creativity in music and the arts is what makes our lives worth living…over the past 15 years, Illustrious has created immersive sound experiences in large-scale urban environments, in galleries, museums, warehouses, theatres, opera houses, architectural interiors, domestic spaces – in fact pretty much anywhere you could imagine sound to exist in your physical world. We have also, of course, created composition for the digital world, and more traditional diffusion methods – TV, film, radio etc. – but today I’d like you to imagine the sonic world of the future…

Our experience has led us to believe that there are many exciting new possibilities for improving people’s sensory experiences, and not just from a traditional ‘event’ based point of view. We believe that as the world spends more and more time gazing through a tiny porthole into a virtual world (both at their workplace and increasingly at home), that there is a greater hunger for communal activity which creates not only diversion and amusement but imparts cultural significance to their lives. Music and sound has always been a powerful tool for this purpose, but we are now entering an age where processing power and the ubiquity of technology and in particular ‘apps’ is making us all more curious and more hungry for new experiences in the real world environment.

The 20th century was dominated by radio, film and television, and therefore, by default, a sense of reassuring linearity of narrative, evolving from our shared history of storytelling. The limitations of this are that the audience is largely told what to think, based on the ‘wise man/listener’ model – whereas our 21st century world is moving rapidly towards a less proscriptive model, when looser, less time-based narrative frameworks allow the observer to populate the ‘experience’ with their own very personal interpretation or meaning.

This is the nexus – the core philosophy which will drive ever more exciting, innovative and significant experiences for all of us in the future. As a musical artist myself, I have always believed that one should never underestimate the intelligence of the audience and willingness to ‘go with it’ however daring – in other words to trust the people, not patronize them.

By way of example- during the London Olympic period, London was an amazing place – many, many new and exciting artistic public installations, financed and supported by a myriad of public, commercial and cultural organisations. Illustrious were commissioned to create two amazing works – one was a 3D soundscape recreation of ‘golden moments’ from previous London Olympics, which took place on the approach to Wembley Stadium – but the most exciting was ‘Tales from the Bridge’ – a 3D soundscape covering the entire 400 metre length of the Millennium Bridge – a composition of ambient, atmospheric drifting electronic music, overlaid with a beautiful, bespoke, Ted Hughes New Poetry Prize-nominated script by famous poet Mario Petrucci. Also featured was the astounding ‘Water Night’ composition by Grammy winning composer Eric Whitacre – featuring 3,500 choristers spread out over the entire length of the bridge. The total effect was one of a kind of ‘magic realism’ – allowing the 4 million visitors who witnessed it over 8 weeks to become engaged in a non-proscriptive but meaningful meditation on the meaning of this part of London and the river itself – social history, poetry, geography, technological insights and sonic beauty stimulating many areas of the mind simultaneously. Simply put, people were mesmerized, and of the 40 or so installations commissioned during the Olympics by the GLA, Tales From The Bridge received by far the most publicity and praise.

Now this is interesting enough, but I lost count of the number of people who contacted us (and told us directly) that in their opinion, this (or something similar) should be installed permanently, as it significantly enhanced their experience of their visit, and that it would be befitting of a city embodying the best of many cultures from around the world to have such ambitions. In particular, it is obvious that many of the installations we, and others, create increase the enjoyment and multicultural, multi-demographical access to culture, entertainment and meaning.

It is very important that, as the lives of people in cities becomes more and more stressed and chaotic, that we actively seek to improve the experience of urban living, rather than just accept our fate. A couple of years ago, The Noise Abatement Society and Brighton City Council asked Illustrious d to create a 100m x 50m x 20m soundscape at the junction of West Street and the Brighton seafront – a notorious and chaotic trouble spot on weekends due to the huge number of drunken partygoers anxiously queueing to get into the many nightclubs in that area – normally resulting in in fighting, arrests, casualties etc. – and ruining the night for many others. The idea was to create a meaningful and entertaining distraction which would enhance everyone’s experience in the area – even the residents and the nightclubs gave us total support. On the night, I became a 3D DJ, ‘reading’ the crowd and playing appropriate content – not dance music, but a variety of real and imaginary 3D soundscapes (including Beyonce’s Countdown slowed to 50% but in the same key!). The installation was such a success that the police deployed their vans with dogs elsewhere for the first time at around midnight as, in their words ‘there is no prospect of trouble’. This was such a revelation that Brighton City Council are looking into the possibility of a permanent installation, and the case study has been presented at Urban design conferences around the world as an example of best practice… immersive public experiences, daringly and passionately curated, will make our lives more livable in a more enjoyable future.

Here are some thoughts about how all these applications can be used now and in the future – some fanciful, but most are completely realistic and practical…

Illustrious has amassed a huge body of practical experience in the past 15 years – we truly believe the time has now arrived to move beyond 20th century thinking about sounscaping, and into the exciting future of how new thinking combined with rapidly developing technologies in immersive sound will create ever more realistic and entertaining experiences.

And remember – sound is half of vision…

Feature image courtesy of Stephen Caton and Festival of Making.